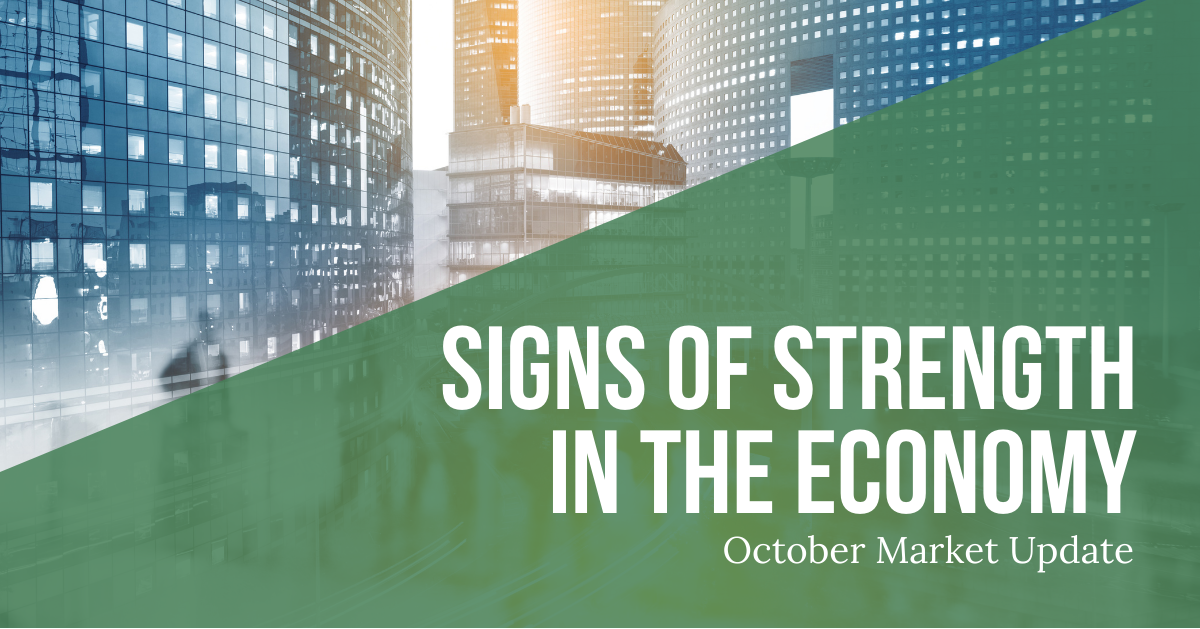 Signs of Strength In The Economy

Autumn has arrived, with students back in school, baseball playoffs beginning, and football in full swing. Life is trying to get back to as normal as possible despite the ongoing impact from COVID-19. While the number of new daily cases and hospitalizations from COVID-19 has steadied in the United States, cases in Western Europe are increasing again, and many are concerned the United States could follow Europe with another spike higher.

Although there are still reasons to worry, a number of positives are on the horizon. A major vaccine breakthrough possibly could be here by the end of the year. The US government has plans to ship 100 million Abbott Labs 15-minute COVID-19 tests over the next several weeks to help accelerate reopening of the economy. Meanwhile, Pfizer’s clinical trial is expected to produce conclusive results later this month, with Food and Drug Administration (FDA) authorization potentially coming soon thereafter. Johnson & Johnson’s vaccine is in the final stages of testing, and promising vaccines from AstraZeneca and Moderna are in the pipeline as well. All of these point to the potential for an improving global economy in 2021.

In another sign of strength, the S&P 500 Index rallied 60% off its March 23 bottom through early September, although it has pulled back some over the past several weeks. After such a strong rally, a 10% correction is perfectly normal and to be expected. Add to this seasonal weakness—the historically poor stock market performance typical of September and October—and investors’ pre-election jitters, and this pullback could be viewed as an opportunity for suitable investors to consider adding to longer-term holdings.

Technology stocks have shown strength during the pandemic, but this group also has pulled back lately, causing many to claim this might be another “tech bubble” similar to the late 1990s. This seems unlikely, as the technology sector has experienced explosive growth, with tech earnings estimates above their pre-pandemic levels, justifying the valuations.

While the economy is showing signs of improvement, it also continues to reflect areas of concern. Initial jobless claims have remained stubbornly high. Dave and Buster’s reported revenue in the second quarter was down 85%, and Live Nation’s revenue was down 98%, as no one was seeing live shows. On the other hand, existing and new home sales both recently hit 14-year highs, and manufacturing has increased for four consecutive months, suggesting the recession is likely over. Amazon has announced it will hire 33,000 new employees at an average salary of $150,000. Certain industries may be years away from fully recovering, while others are moving along like nothing is wrong.

The contrasts in Washington are evident as well, with the presidential election only one month away, but all isn’t lost. There’s growing optimism that a new coronavirus relief package may still be possible before the end of the year. The Federal Reserve also is doing what it can to help spur confidence and liquidity in the markets. November’s winner will inherit an improving economy and one that will likely see strong growth in 2021, as multiple vaccines and therapeutics help spur the economy to open up more fully.

These signs of market and economic strength tell us that better times likely are coming in 2021. Stay safe these final months of what’s been a very challenging year. And please contact us if you have any questions.